What is try block

A try block is used to surround a set of statements where exceptions may occur.

A try block used with catch and finally block

What is a catch block

A catch block is created followed by a try block.

There can be more than one catch block for a try block.

Java finally block is also associated with a try block.

Finally block is used to release resources that are used in a try block.

Finally block gets always executed when there is exception or not in try block.

Syntax of try-catch and finally

occurs at the line “a = 42 / d; then this exception is thrown, program control transfer block to catch block.

block has executed program control continue with the next line in a program following entire try/catch statement.

In java programming, when within a try block multiple occur then for handling those we use multiple catches with a try block.

Than the output is:

Than the output is:

In Java programming, in a sequence of catch statement exception subclass must come before its .

In a series, if exception comes subclass than exception would never be reached.

To solve the problem, reverse the order of the catch statement.

In java programming, it is possible to create a try block within another try block. Such try block is known as nested try.

If there is no command line argument present then the output.

If there is no command line argument present then the output.

User-Defined Exception in Java with Examples

Q : When a statement within a try block causes an exception, the remaining statements in the try block

Ans: Will Not be executed

Q: In a try/catch construct, after the catch statement is executed:

Ans: Statement just after the catch is executed

Q: Can you have multiple catch blocks on a try statement

Ans: Yes, as per the need we can have multiple catch blocks on a try statement

Ans: Get Executed. If with try block finally is associated then it always gets executed no matter it throws an exception or not.

Q: A try block may be followed by a finally block, without a catch block (Java try without catch).

Ans: Yes we can use try and finally without a catch block.

Ans: Throw statement is used to throw an Exception

Q: When is the code within a catch block executed?

Ans: If an exception occurs within the code in the try block then matched exception in the catch block gets executed.

Java unreported exception How to Handle it

You can handle it

Which of the following Throwables needs to be declared?

In java programming, If the exception occurs within the try block it is thrown.

a throw keyword is used to throw an exception

A system-gener exception is automatically thrown by the java system but if we want an exception, we can do so by using the throw keyword.

here, ThrowableInstance must be an object of type Throwable or subclass of Throwable.

In this program new is used to create an instance of NullPointerException and we get two chance to deal with the same error.

In the line  “throw new NullPointerException(“demo”);”

throw keyword is used to throw  NullPointerException(“demo”). Here we set “demo” is a name of exception.

This NullPointerException(“demo”) catch by catch() method which resides in a demo() method.

Line “throw e;”  re-throw the exception which is catch by catch() method which resides in a main() method.

In the throws clause, we declare all the exceptions that a method can throw.

Here, exception1, exception2 are comma, list of the exception that a method can throw.

Here we set “demo” is a name of thread.

This line “throw new NullPointerException(“demo”);” throw the exception which is handled by catch block associated with try within main().

Difference between throw and throws in Java (throw vs throws)

throw is used inside method

What is the purpose of the throw statement?

this can be implicit or explicit

throw ArithmeticException(“Denominator can not be zero”);

To catch an exception one or more catch blocks can be used so that program executes properly.

The Throw keyword is used to manually throw an exception.

How to Throw Exceptions 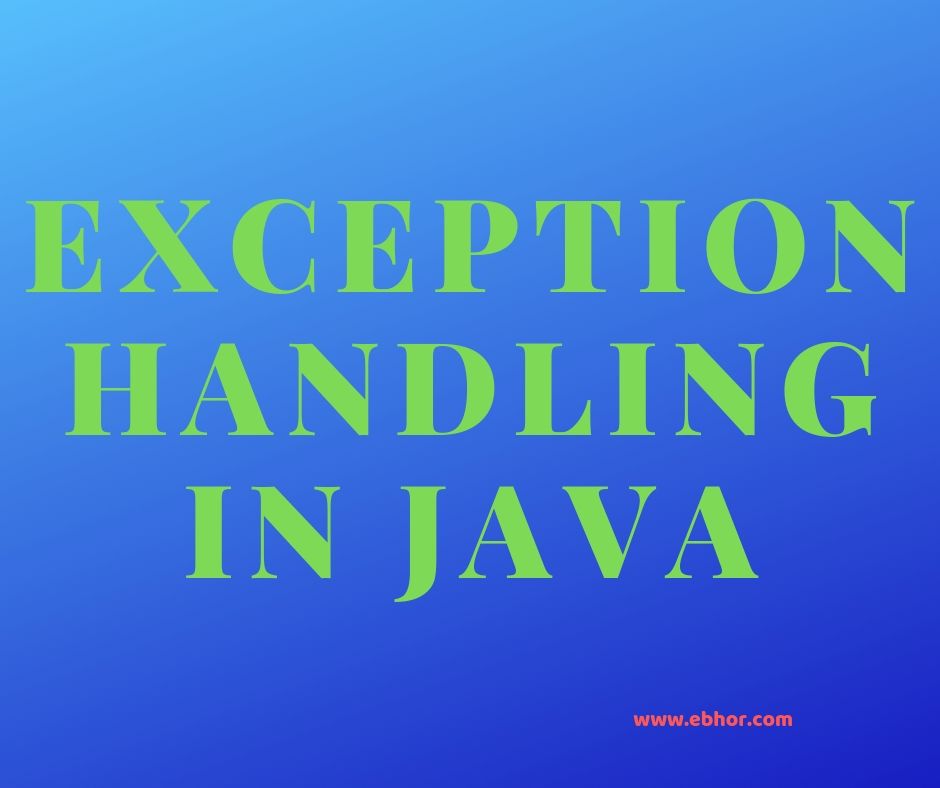 What is an Exception in Java

An exception is run time error that can occur due to wrong user input or due to logical error in programming.

We complice above program

while running this program we will pass

two values to program as below

Above two values 10 and 2 known as command  line argument these values are accessed in string [] s.

S is string array so we converted these string values to integer by calling Integer.parseInt(value)

Here Integer is a class and parseInt is static method used to convert string value to int value.

The converted value is stroed in a and in b

The result of division operation is

It will store value 5 in c.

Next statement print division is 5

This is our desired result.

What happen if user enters value 10 and 0.

What happen if user enters value 10 and 0.

The output is a below.

The above exception is due to Wrong user input.

To handle above situation we can use user input validation or exception handling.

Lets see user input validation here before division operation check whether the value of b is zero or not.

If it is zero information to user and stop the program else perform the division as below.

divisor should not be zero

This program validate the denominator is zero then print message to user else perform division operation.

Here validation is used to avoid the exception. This is good practice to validate user input to avoid exceptions.

In above program to handle exception try and catch blocked is used.

Inside try block the code is written which can throw exception.

The statements which can throw expection is written inside try block.

Catch block executes when exception is thrown from code inside try block.

In above program int c= a/b;

exception is thrown when the value of b is zero so it should be inside try block.

The statement System.out.println(“division is “ + c); is not throwing an exception it is also inside the try block.

If division statement throw an exception. The control is passed to catch block and necessary action is performed inside catch block.

The catch block is only executed if statements inside try block throws an exception.

Here second value is string so throwing above exception

Integer.parseInt (s[1]) throw an exception  because it is unable to convert string to int.

In our program we handled only arithmetic exception

To handle this exception lets modify our code

again compiling and running this code

System.exit(1) is used to exit from program.

Here denominator is not a number so no need to continue the program.

If you want we can use one try block and multiple catch block.

Here all type of exceptions are checked in try block when an exception is thrown based on exception a catch block is executed.

Exception is parent class for all exceptions.

Any exception thrown can handle by catching exception.

Which of the following is not an advantage of Java exception handling?

In java exception handling, any code that we want to must be execute put inside the block.

After the execution of try and catch block, block executes. try block must be used with either catch or finally, or with both.

But either exception occurs or not, in both condition finally block executes.

Example1:  write a program to demonstrate the use of finally block with try.

than exception occurs the following two lines will never execute

But finally block executes. And output is:

use finally block executes. The output is:

Note: In this program, we have not used catch block, means when an exception will be generated the program will never execute but finally must be executed .

Example2: write a program to demonstrate the use of finally block with try catch.

In the above program, we two , in the first condition we set array a is “a[100] = 20;”  than exception occurs the following  line will not execute

is thrown which is caught by “catch(Array)” after the catch rest of the program will execute. and the output is:

One of the important topic Exception handling in java

Here we will discuss basics of exceptions, Why Exception handling and its types.

What is Exception in Java

A unwanted event that disrupts the program execution.

In Java all Exceptions are class.

What is Exception Handling in Java

Exception can terminate the program execution.

How to Handle Exception in Java

Java exception can be handle by 5 keyword  try, catch, throw, throws and finally.

try block can be used either with a or finally block or with both but try cannot be used alone.

A try can have multiple catch block.

When there is an exception in the try block an appropriate catch block is executed based on the exception.

In java programming, Exception class is a subclass of class Throwable.

Apart from the class, class Error is also derived from class Throwable.

Error: In java programming, error is Unrecoverable. It occurs during compile time.

For example, if we write wrong syntax then error will generate during compile time.

Root class of exception in java

Throwable is the root class of exception in Java

Types of Exception in Java

Exceptions that are checked by compiler is called checked exceptions.

On compiling above program.

To make code executable we must surround Scanner with try and catch the FileNotFoundException.

Exception condition is not checked by compiler.

Runtime class and its sub classes are known as unchecked exception.

Compiler does not flag any error if there is unchecked exception.

What is difference between checked and unchecked exception in java

Checked Exceptions are checked by compile at compile time.

Unchecked Exceptions are not checked by compiler.

Advantages of Exception Handling in Java